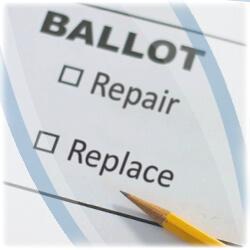 At this point in the article series you’ve identified the problems or issues faced by the users, you know what your objectives are for your system, and you’ve determined the costs of continuing to struggle with the system. With this in mind consider the level of the problems:

If the answer to questions like these is yes, then you are probably headed toward Repairing the system, not Replacing it. Often your existing systems can be optimized by retraining new users in how the system was designed to be used and eliminating external workarounds that have not been formalized as part of the managed system.

Sometimes automating existing manual tasks can address some issues. For example, many shipping departments have invested in linking the parcel shipment activity with their ERP system thereby reducing or eliminating extra data entry as part of the shipping steps. This helps reduce errors and increases the productivity of members of the shipping team.

In some cases, the system seems adequate to the users but decision makers struggle with existing reports or spend too much time manipulating data in spreadsheets to get the information needed for decisions. To address reporting issues, first look for existing reports in the system to see if any of them provide the information you are looking for. If none of the reports fit the needs, then consider doing some custom report writing or extracting data to a third-party reporting tool which can better meet the information needs of the decision makers.

Compare the costs of continuing to use the system as it is to the amount of investment required to improve the productivity of the system. If the potential savings exceed the investment amount then it is time to look at the payback period in relation to your other investment needs and decide how to proceed. Often companies look for a relatively short payback period on these types of project of less than a year.

I’ve been brought into many situations where the CEO has heard about so many issues with the ERP system that they call the CEO of the software company and have a conversation that goes something like ‘either get someone in to fix this thing or we’ll …’  You can fill in the blanks. In most cases the issues arose because there was not enough internal documentation of how the system was implemented. New users who did not understand how the system should be used developed external workarounds or used the system incorrectly which resulted in inaccurate information or extra effort outside the core system. Usually some training and  some new reports were sufficient to address the problems.

If, however, you find the answers to the above questions tend to be “no” or there have been some significant changes to the business and the system no longer supports the growth of the company, then it is probably time to Replace the system. Replacing the system involves looking at the market, evaluating prospective systems by comparing them to your needs and objectives, then implementing it once a new system is selected.

In a previous section we discussed the costs caused by the issues the team identified. These are the costs of doing nothing and sadly, too often CEO’s decide to take this approach even when those costs could be offset with investing in the current system or selecting a new one.

I worked with a company who inquired about having some custom reports developed to give them a clearer picture of when their products’ shelf-life would expire, a fairly straightforward reporting option. Even though the materials manager identified that they would save the equivalent of a quarter to half an employee’s time, the CEO elected to not proceed with the project due to the initial cost. Consequently the company continued to manually look for product on-hand that is nearing the end of its shelf-life and updating it.

Have you ever been a part of a decision like this before? What’s your experience been with the Repair/Replace dilemma?